HOW TO CLEAN A GLOCK

HOW TO CLEAN A GLOCK

How To Clean A Glock-Some people take pride in maintaining their guns, and some people take a perverse pleasure in not doing it. It is a chore to be sure, but like any chore…you have to do it at some point!

Cleaning your handgun will help you,here is why:

HOW OFTEN SHOULD YOU CLEAN  A GLOCK? 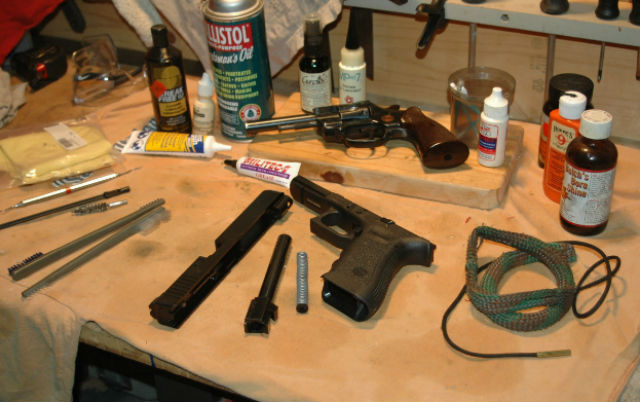 How often you should clean your gun depends on what kind of gun you have, how much you’re shooting and how often. There isn’t a set round count; it’s more that if you’re seeing a lot of carbon inside it, it’s time to clean it. how often to clean glock

If you don’t shoot much and/or often – say a few boxes a year – cleaning is not much of an issue. However, if you shoot a high volume of ammunition (say a few hundred rounds in a sitting) and doing so regularly, that equation can change.

With that said, some guns – including various pistols, revolvers, rifles and shotguns – need to be kept cleaner than others or else you’ll start having issues due to the design of that specific firearm. Just like cars, how to maintain them is the same – change fluids, rotate your tires, replace stuff when you have to – but exactly how you do those things depends on the make and model you drive.

A modern polymer striker pistol like a Glock, an M&P, a Sig P320 doesn’t need to be cleaned all that regularly. Clean the barrel once in a while, keep the frame rails lubricated and you’re basically good.

When Glocks malfunction (they can and do, contrary to popular myth) one of the most common causes besides limpwristing is when the frame rails have too much carbon buildup and/or aren’t lubricated.

There isn’t much metal-on-metal contact, so there aren’t many areas that are vital to keep clean. The only contact a Glock frame makes with the slide is four sheet metal tabs set in the frame; keep the frame rails and the tabs clean and lubricated, maybe add a few drops of lubricant to the top of the barrel and you’re good.

The classic metal-framed pistols like 1911s, Hi Powers, all the old Wonder Nines (Beretta 92, Sig P226, CZ-75) and so on need – at minimum – the frame rails to be kept clean and lubricated at all times.

A good rule of thumb for those pistols is to clean the slide and frame rails after every shooting session, and apply lubricant. It’s also a good idea to add a few drops of lubricant to the top of the barrel, basically anywhere there’s metal-on-metal contact. 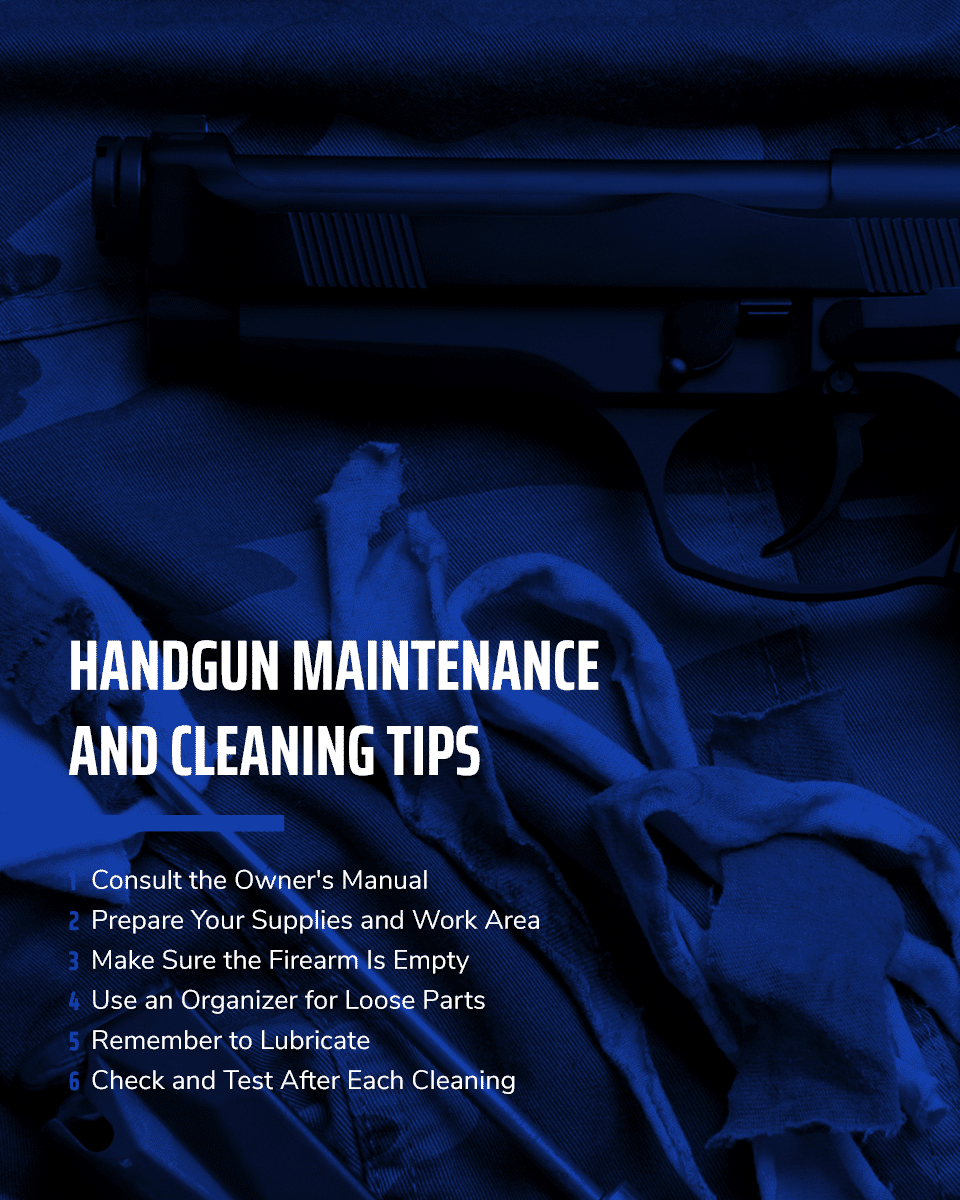 The exact steps to handgun cleaning depend on the make and model, how often you clean it and even your personal preferences. But regardless of the type of gun you own, there are several common tips out there that will make your cleaning session easier. When you’re ready to perform any kind of maintenance on your weapon, you should:

If you’re new to a particular handgun or need a refresher on how to disassemble and reassemble your piece, the first place you should go is the owner’s manual. It’ll have everything you need to know about the inner workings and mechanisms, as well as how to work with them safely. Pre-owned guns may not always come with a printed manual, but you can request one from the original manufacturer should you want or need it.

2. PREPARE YOUR SUPPLIES AND WORK AREA

Before you begin pulling apart your handgun, it’s best to set up a workstation with all your supplies at the ready. By doing so, you won’t have to keep getting up to look for things while you’re trying to clean. Aim for an area with good lighting and ventilation, as you need to inspect small parts and the firearm chemicals and solvents are often toxic. Use a table or mat with plenty of space to spread everything out and keep your supplies at an arm’s length.

3. MAKE SURE THE FIREARM IS EMPTY

Safety is of the utmost importance when it comes to handgun maintenance. Even if you know the chamber and magazine are both empty, it can’t hurt to check, and the alternative could be highly dangerous. Remove the magazine, open the chamber and store all the ammunition away from your work area. If your handgun has a safety, it’s a good idea to switch it on while you’re handling the weapon.

4. USE AN ORGANIZER FOR LOOSE PARTS

As you’re taking apart a handgun, you’re going to have to handle and keep track of tiny parts, such as screws and springs. If you place them on a flat surface, there’s a chance you may lose the pieces or misplace them. It’s also possible you could accidentally swap parts if they look similar, especially if you aren’t familiar with what screws go where. An organizer with divided sections will help you keep all the pieces organized and prevent you from losing any while cleaning.

Once you’ve finished cleaning, it’s essential to lubricate your handgun. When you use solvents and other chemicals to remove dirt and grime, it can make the metal susceptible to rust. If you forget to re-apply oil and leave the solvent residue, there’s a chance parts of your gun will corrode. Once you notice rusting, it may be too late to fix it, but proper lubrication and storage will prevent it from forming.

Forgetting to apply oil can have worse results once you go to use your weapon. The metal components that strike one another or rub together create friction, and without lubricant, it can cause your gun to malfunction. If you lubricate it right after cleaning, it’ll be ready to go the next time you need it or want to head to the range.

6. CHECK AND TEST AFTER EACH CLEANING

It’s best to double-check your process and the gun’s functionality after you reassemble it. To confirm your weapon is properly assembled, you can look back to the owner’s manual. It’ll help you identify if anything is missing or out of place. If it looks good, give it a quick function test to make sure the mechanisms are working and that nothing catches or prevents the gun from firing. It’s good to know if anything is wrong before you go to use it next.

ARE YOU LOOKING TO BUY YOUR OWN SEMI AUTOMATIC PISTOL ? contact us here for inquiries

Your satisfaction is our number one concern!1 Dismiss